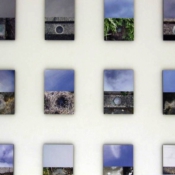 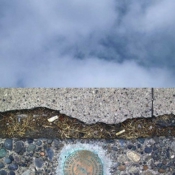 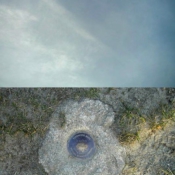 Precisely Known Completely Lost features visual and audio samplings from survey stations recovered during a two year period of time. In the images, each survey station is paired with the sky directly overhead to create a composite landscape. The audio possesses a similar arrangement. Field recordings from the ground plane are paired with aerial perspectives to create directional sounds within the gallery. Navigation is portrayed as a multi-layered process, ultimately rooted in one’s own perceptions. Survey stations are the tangible remains of a lost navigation. Historically, these small bronze disks were used to make maps, assess property, and draw boundaries. Satellite mapping has rendered survey stations nearly obsolete, but over 500 still remain, imbedded like fossils in the streets, sidewalks, buildings, and parks of King County. These disks are slowly and steadily being paved over, plowed under, and otherwise obliterated. My goal is to document these landmarks, in image and sound, before they disappear.

Please click on the > below to listen to the audio for this project.